Passengers using the new Passenger Waiting Shelter on Platform 1 at Cricklewood Station will be able to learn about the history of Cricklewood from the artwork that now adorns the glass panels.  QR codes link the artwork panels to pages on the Cricklewood Town Team website, where more detailed information of the images is provided.

The artist Freddie Needle created the artwork, which reflects the industrial history of Cricklewood, as a montage of imagery in a variety of mediums, including her paintings, prints and photographs.  During the investigation of Cricklewood, Freddie was assisted by Town Team member Bee Dred.  Measuring 9 by 6 metres the work captures the history of Cricklewood from the arrival of the railways in 1860s and their subsequent impact on the area.  The aero industry followed and was based at Clitterhouse Farm, which was rented by the father of Suffragette – Gladice Keevil, from 1874 – 1926.  The Farm was used to test early tanks, with the Handley Page factory based there during WW1; the Aerodrome was used for commercial flights to Paris from 1919.  Amy Johnson, the first woman to fly solo from England to Australia in 1930, lived in Vernon Court, where a Blue Plaque is displayed; linking with the tribute mural to her by artist Lakwena on the Platform wall.

The Handley Page aircraft in Panel 3 provides a link to the eye-catching imagery of Handley Page biplanes on the walkway up to platform; created by Cricklewood-based artist Alistair Lambert.

Freddie has captured images of the industrial businesses which thrived in Cricklewood and of the historic Crown Hotel, whose provision for coaching travellers dates to 1750s; it was rebuilt in 1889.  In the last century the Crown was the focal point of the Irish community who migrated here, many to help build the roads and houses so badly needed after WW2.

Local historian and artist Bernard Canavan has included his painting from the 1970s which shows the Irish labourers loading up early in the morning and the delivery of Irish food from O’Kane’s red van, with the young boy – Eddie O’Kane aiding his uncle; he has kindly provided a copy of this artwork.  O’Kane is a thriving Irish Foods business still located in the neighbourhood. Bernard is well known for his local talks and walks about the migration of the Irish community.

Key industries included Stoll Studios who produced a series of silent films in 1920s including The Prodigal Son and The Four Feathers and was then the largest in Britain.  Smith’s Crisps were developed by Frank Smith and his wife near the Crown; they invented the “twist of salt in a blue wrapper” and Smith’s Industries who produced watches and clocks.  In 2012 a restored vintage clock was installed on the Broadway.

Freddie Needle tells us that she “has always been interested in architectural history and the connection it has with the past.  I choose a sepia background to reflect an air of nostalgia. I wanted to create a visual narrative that recorded Cricklewood’s industrial diversity and was accessible to all.”

Bee Dred added that she’d “lived in the area for 20 years and it was a pleasure to share my enthusiasm for the architecture and history of Cricklewood   with Freddie.”

The vinyl graphics were undertaken by Modelsigns, whose support through the design process has been immeasurable.

Cricklewood Town Team lead for this project Angela Payne said: “It has been a pleasure to work with Freddie and Bee to capture the rich history of Cricklewood and provide the opportunity to engage local communities in the history of their area.  Travelling on Thameslink after linking on the QR code will enable passengers to learn as they travel.  Bernard Canavan’s input into the history of Irish migration and the importance of the Crown has been inspiring.  This is the final project being delivered at the station thanks to the Passenger Benefit Fund.”

This is the 3rd and final project through the Passenger Benefit Fund at Cricklewood Station.  Angela was the lead on this project by the Cricklewood Town Team working with local artists and historians.  Read more

The other 2 projects through the Passenger Benefit Fund were delivered by NorthWestTWO RA – mural leading up to Platform 1 and the bridge painting in Cricklewood Lane. 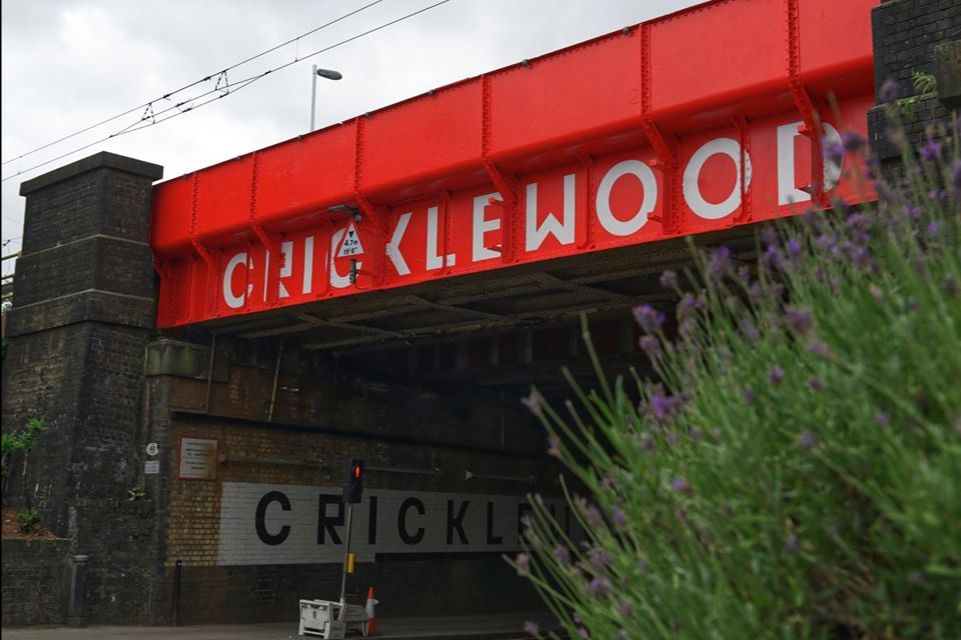 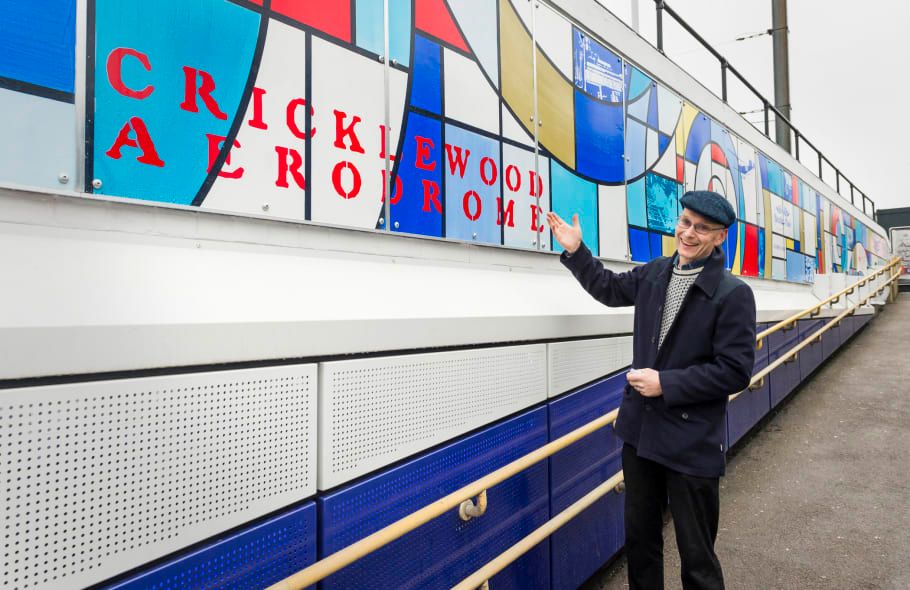 This website uses cookies to improve your experience while you navigate through the website. Out of these cookies, the cookies that are categorized as necessary are stored on your browser as they are as essential for the working of basic functionalities of the website. We also use third-party cookies that help us analyze and understand how you use this website. These cookies will be stored in your browser only with your consent. You also have the option to opt-out of these cookies. But opting out of some of these cookies may have an effect on your browsing experience.
Necessary Always Enabled
Necessary cookies are absolutely essential for the website to function properly. This category only includes cookies that ensures basic functionalities and security features of the website. These cookies do not store any personal information.
Non-necessary
Any cookies that may not be particularly necessary for the website to function and is used specifically to collect user personal data via analytics, ads, other embedded contents are termed as non-necessary cookies. It is mandatory to procure user consent prior to running these cookies on your website.
Functional
Functional cookies help to perform certain functionalities like sharing the content of the website on social media platforms, collect feedbacks, and other third-party features.
Performance
Performance cookies are used to understand and analyze the key performance indexes of the website which helps in delivering a better user experience for the visitors.
Analytics
Analytical cookies are used to understand how visitors interact with the website. These cookies help provide information on metrics the number of visitors, bounce rate, traffic source, etc.
Advertisement
Advertisement cookies are used to provide visitors with relevant ads and marketing campaigns. These cookies track visitors across websites and collect information to provide customized ads.
Others
Other uncategorized cookies are those that are being analyzed and have not been classified into a category as yet.
SAVE & ACCEPT